Lode Runner is a 2D puzzle-platform game, developed by Douglas E. Smith and published by Broderbund in 1983 .

When you start Game it will be the Main Menu of the game . 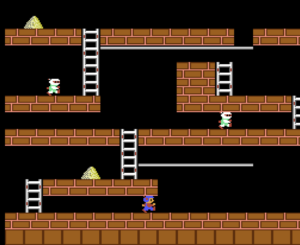 The player will need to collect all the gold while avoiding guards enemies  who try to catch the player. After collecting all the gold, The Payer will reach the next level of the game .